On 6th February 1958 the airliner carrying players and backroom staff of Manchester United, plus a number of journalists and supporters, crashed in a blizzard on its third attempt to take off from Munich airport.
United were returning from Belgrade where they had just beaten Red Star Belgrade in the European Cup and had stopped off at Munich for re-fuelling. Twenty-three of the forty-four passengers on board the aircraft lost their lives. (From www.munich58.co.uk) 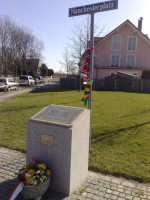 The above website gives you alot of comprehensive information about Munich which includes Victims & Survivors, Memorials and tribute books.

Planning on Visiting the Memorials in Munich?

If you are visiting Munich and are planning on visiting the Memorials below is a link from www.munich58.co.uk which provides the relevent information in finding them:

The Last Line Up